Don’t Worry So Much, It’s Just A Little Radiation!

We got a new toy!

Hey guys!  I have to take a moment and use this blog to tell you about our exciting new piece of equipment at the office.  We just got a digital panorex machine!  Oh, you probably don’t know what that is.  Well, let me explain.  A “pano” or panoramic radiography is an x-ray which gives us a good overall look at what’s going on with your mouth.  The x-ray shows everything from nose to chin and ear to ear.  It allows us to see the roots of all of your teeth and your jawbones.  It is recommended that everyone have a full mouth x-ray every 3-5 years, and for this, we often take a “pano.”  So, now our machine for this x-ray is digital.  The digital image has better clarity and is thus more diagnostic.  The digital format is also easier to work with when we have to try to send your x-rays to a specialist.  Another nice perk of digital x-rays that everyone can appreciate, is that they require less radiation than their film counterparts (70% less, in fact!).  That brings me to the topic of today’s post.  Radiation! Most people do not give radiation much thought when we take x-rays of their teeth, but some are very concerned about it.  They will say that they’ve had a lot of radiation in the past and don’t think they should have more if they don’t need it, or something else along those lines.  I’m going to be honest.  This frustrates us.  Not because you don’t have a right to refuse x-rays or to be concerned about what they entail, but because many of the people who worry about radiation at the dental office are uninformed.  So, let’s set some things straight.

The radiation you receive during routine dental x-rays is very minimal.  You are exposed to radiation every single day, from the sun and other sources.  Take a look at this nice chart that I took from Wikipedia.

Based on this information, we can say that the average person gets about 6 millisieverts (mSv) per year.  If you divide this by 365, you get 0.016 mSv per day.  A routine exam which includes 4 bitewings is about 0.005 mSv, which is significantly less than one day of background radiation (and is also less than the natural background radiation alone, without the artificial sources factored in).  This is said to also be about the amount of radiation you would get on a short plane flight (about 1-2 hours).  A panoramic x-ray does use more radiation than a set of bitewings, but is still only about 0.01 mSv.  Another interesting comparison point to note is that you receive more cosmic radiation if you live at a higher elevation, because the atmosphere is thinner there and doesn’t filter it out as well.  You’ve never heard of people not wanting to live in Denver, Colorado due to radiation, have you?  The people there receive more radiation than the people of Fayetteville every day, and don’t think a thing about it.

Your doctor is much more likely to “make you glow in the dark” than we are.

Another thing I would like to point out is that our x-rays require much less radiation than many tests your doctor may order.  A mammogram, for instance, is about the equivalent of 40 of our panoramic radiographs.  A head CT is about 200 times more than a pano, and a chest CT goes up to 700 times more!  Those aren’t even the most radiation involving tests, but they are fairly common tests which is why I chose them for my examples.

See, nothing to worry about!

So, if you have concerns about radiation when you come to see us, please remember that we have great modern equipment which gives off less radiation and that the radiation needed is very minimal compared to what we receive naturally every day.  I think we all have enough to worry about without stressing out about dental x-rays! To learn more about our dental technology and how it can improve your dental visit, call (479) 217-3178 or request an appointment online. 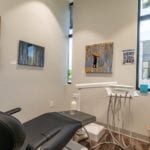